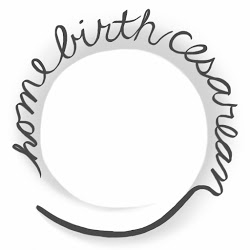 I recently had a woman contact me concerning a project she is working on called the Home Birth Cesarean.  I decided to do an interview with her to get the word out about this resource.  Having had students whose home birth turns into a cesarean, there is certainly a need for this resource.  Hope it is helpful to women out there and I am so grateful somebody is doing this important work. This is my interview with Courtney Jarecki, founder of HomeBirth Cesarean.

First- tell us just what exactly the HomeBirth Cesarean project is.

Homebirth cesarean (HBC) focuses on the experiences of families and birth professionals who planned out-of-hospital births that ended in cesareans. Our work focuses on offering information, support, and strategies to improve the experiences of all involved, including the midwives, doulas, and childbirth educators.

What is your personal story?  What called you to start this project?

The Home Birth Cesarean book began as a conversation between me and my midwives, eight months after my birth.  I reached out to provide feedback about their care and we were able to process the birth together.  This topic sparked an interest in Laurie, one of my midwives, who proposed that we collaborate on an article; I countered with a  book.  Laurie agreed.  From that conversation this project was born.

A few months later I created the Homebirth Cesarean Facebook page and invited every birth worker and homebirth cesarean mom I knew. I wasn’t sure what my purpose with the group was, but knew it needed to be out there. An hour later there were 50 new members and now, a year later, there are over 1000. It quickly became clear that the intention of the Facebook group was to bring both HBC moms and birth professionals together so practitioners can listen, observe, ask questions and learn how to better support HBC mothers. This group has helped so many moms in their healing process and changed the way midwives, doulas and childbirth educators talk to their home birth clients about cesarean.

Do you feel that home births that end in cesarean are a kind of "dirty secret" in the natural birth community?  If so, why?

Home birth cesareans are not widely talked about, and many mothers feel that their stories aren’t welcome in natural birth communities. Home birth has had a long battle for legalization and legitimacy in this country. As part of that fight, well-intentioned mothers and birth advocates tend to put the spotlight on stories of mothers having their babies safely at home, often quickly and peacefully. Yet, in focusing on only the “poster” stories, we have pushed aside the very real experiences of women whose home births did not go according to plan.

We hear stories from HBC mothers whose midwives did not announce their births or ask for their birth stories to post on their websites. As an HBC mother from Ohio says: “I will never be invited back to share my experience in the childbirth class I took because they don’t want pregnant women to hear my kind of birth story. My story isn’t posted on my midwife’s website even though I could write a version they could be proud of. It would show that cesarean does happen and that it is valid. Moms could read it and critically think about the possibility. If moms never hear about HBC from their midwife, they may never think about it happening to them.”

Many women believe in slogans that tell them all women are designed to birth, that if you can poop, you can have your baby at home and that all they must do is believe. For the home birth cesarean mother, her experience seems like it is outside the spectrum of the home birth narrative. She is often sure she is alone in her experience, because no one is talking about her type of birth. Our goal in creating Home birth Cesarean is to offer support and community for these women and the birth professionals who support them.

How do these mothers find their place in what can sometimes be a polarizing birthing community?

By finding other mothers like them, home birth cesarean women learn they are far from alone. They feel like they can share their stories with other HBC mothers without being told to just be happy they have a healthy baby, or that home birth was a poor choice to begin with. Even having a name to call their birth can feel like coming home or finding a new identity. Many home birth cesarean moms don’t feel like they can lay claim to the term home birth, and at the same time, cesarean doesn’t seem to fully cover the intense preparation and intention behind their births. Home birth cesarean, as one HBC mother said, “gives me a name, a place on the shelf. I belong.”

Do you think that cesarean is more difficult when a woman has planned a home birth?

Women who have a home birth cesarean have a different birth and postpartum experience than those who planned a vaginal birth in the hospital. HBC mothers face a number of emotional pain points in their birth experiences including not birthing at home, not birthing vaginally, and having a cesarean birth. While it is true that cesarean birth is not traumatic for every woman, for the woman who planned an out of hospital birth it is often her absolute last choice and her greatest fear.

The mother who plans a home birth often believes that cesarean will not happen to her by virtue of having chosen a home birth. She believes she can avoid the hospital all together, with its rules, timetables, and protocols. Home birth mothers choose to have their babies at home because they have a strong vision of how they want their children to enter the world, how they want to be treated, and how they want to meet their babies. They develop close relationships with their health care providers and do not expect to have strangers be the first ones to touch their babies. The trip from home to operating room is a long one, not unlike traveling to another world entirely.

Many HBC mothers we interviewed have experienced a profound sense of failure in their bodies and their self-confidence has been eviscerated. They not only give birth far from any place they consider familiar, they must pursue their emotional healing while recovering from surgery that can affect their ability to care for themselves and their new child. While this does not make their pain any more valid than another mother’s, it speaks to the particular needs of the home birth cesarean mother. All mothers deserve a chance to share, and be validated for the way that they gave birth, no matter the route. Home birth cesarean mothers need that chance, and that is what our book and the HBC community provides.

Tell us what you are doing to help home birth cesarean mother's find peace in their birth experience?  What can WE do to help?

We offer online peer support and are developing training and certification programs for professionals and laypeople who want to support HBC mothers. We share and honor home birth cesarean stories on our blog, validating them as part of the spectrum of birth. Our efforts also focus on helping midwives, doulas and childbirtheducators learn how to better prepare women for the possibility of cesarean, so that it becomes part of the conversation instead of an unspoken fear.

Laurie and I also offer courses for birth professionals to learn skills for coping with the home birth cesarean experience. These workshops are offered as a three-part series, day/weekend intensive, or a concentrated topic. Currently offered in Oregon and Washington, the classes are also designed for national and international birth and postpartum conferences attendees with CEU credits available. The first class focuses on prenatal cesarean preparation cesarean for all home birth families, the second class centers on the actual transport and cesarean experience, and the third class highlights helping HBC families in the postpartum time.

We’ve also worked to spread the word about home birth cesarean through talks to various perinatal health groups. In March 2011, I shared my birth story at the Oregon Midwifery Council spring conference to an audience of more than 100 CPMs, CNMs, and midwifery students. Laurie and I have since presented our research findings, gleaned from interviews with close to 200 HBC mothers, midwives and health care providers.

As far as what everyone can do to support home birth cesarean mothers, you can listen to them. Reassure them that they did their best, they tried hard, that they too are birth warriors and belong in the home birth “club”. Hear their stories without telling them that a healthy baby is all that matters. Tell them they are strong and authentic mothers, even if the way their babies were born was not the way they planned. And finally, talk about cesarean as a possibility and, sometimes, necessary outcome. While the cesarean rate in our nation is far too high, it does a disservice to brave women who sacrifice their birthing dreams and their bodies to speak as though all cesareans are the result of ignorance or weakness.

Home birth cesarean mothers offer up their bodies, ego, and dreams to bring their babies to their arms, and they deserve to be honored alongside mothers who met their babes at home. Ultimately, our vision is of a world where everyone woman faces birth with the support and information she needs to face what comes with dignity, knowing she did her best, and she did give birth.

Anonymous said…
Thank you so much for your efforts at being honest about the alienation women can impart to others by denying them the opportunity to share stories (no matter how much they differ) and validating the need to belong in a community. I have often resisted homebirth or crunchy granola circles because they get so high-faluting about the Perfection of Homebirth and how they know better than me, who wanted to be at a hospital and ended up in cesarean. The sentiment was often "If you'd done it at home..." Articles like this validate the concerns without undermining the good of the homebirth community, I feel. And it brings us all closer together in supporting each others' decisions. Thank you and God bless you.
July 9, 2013 at 4:33 AM

I am for home births but have myself had a c-section and often I feel like my voice doesn't matter as I never birthed at home. Thankfully it doesn't eat me up anymore but it certainly did before. I hope this helps bring peace to other amazing mamas in my position!
July 27, 2013 at 1:34 AM