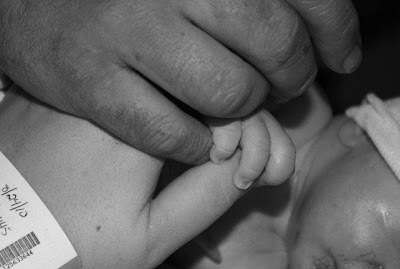 
I love this faith filled VBAC journey and how the hospital midwives encouraged mama to trust her body as she pushed her baby out. Hospital VBAC is possible- commitment and a great team make a world of difference.

This birth story actually starts with the birth of our first daughter, Addison Rose, on January 13, 2009. Addison was born via emergency C-section before I ever went into active labor. Even though she was perfect in every way, I knew from the day she was born that I wanted the next birth to be different...that I wanted to experience labor and birth the way it was intended. This started my vbac journey.

Jason and I were elated to find out the day after Christmas 2010, that we were expecting, after 11 months of trying! The next 9 months were full of reading, studying, talking with friends, and learning everything I could about vbacs and natural childbirth. I wanted to be as prepared as I possibly could for the “big day.” We decided to switch to a midwife group for prenatal care (which was the best decision we could have made).
September 2nd, my estimated due date, had come and gone, and our little girlie had yet to grace us with her presence. I had been having Braxton Hicks contractions for quite some time, and they had just become a part of daily life. Saturday, September 10th we decided to have friends over for dinner. I made a comment to Jason before they arrived that it would be ideal to go into labor while they were over since it would help distract me. That entire evening I noticed my contractions were getting progressively stronger but not any closer together. Jason and I headed to bed a little before 1 a.m. but I knew after the first couple of contractions that lying down was not an option at that point. I headed to the living room where I turned on my Pandora radio station and the first song that started playing was “The Words I Would Say” by Sidewalk Prophets:

I knew as soon as I heard these words that I was going to accomplish what I had set out to do…I was going to get my vbac. I had such a peace about the birth of our daughter.

Sometime around 4 a.m. I headed to the shower because the contractions were getting quite uncomfortable and my back was hurting more and more. The warm water felt wonderful on my back and belly so I stayed in until all our hot water ran out. After I got out, I started attempting to time my contractions, which was quite unsuccessful. I finished “getting ready” and headed back to the living room to try to focus a little more on working through the back pain that was demanding my attention. About 6 or so I decided to go wake Jason because I felt I needed his help at this point to relax and couldn’t manage to correctly time my contractions. He made his way to the living room with me and we talked, laughed, relaxed and focused together. My contractions at this point weren’t consistent but were coming fairly close together, between 3 and 5 minutes, and were lasting anywhere from 45 to 90 seconds. We stayed like this till Jason noticed that I was hitting the “serious” signpost of labor and no longer wanted him talking during my contractions. We decided to make the call to the midwife on call (Margie) to see what her advice would be regarding heading to the hospital. We had a nice conversation during which she listened to me work through 3 contractions. I told her I didn’t want to go to the hospital too early and have my labor slow down, but I didn’t want to wait too long either. Her advice was to start getting our things together and make the call to Jason’s parents to come over to stay with Addison…but not to rush. This was about 7:30. Jason called his parents and I started collecting my last-minute items for my hospital bag. Just after Jason’s dad got to the house Addison woke up, which made things more difficult for me. I didn’t want her to think something was wrong with mommy but I definitely couldn’t talk to her during contractions. We finished getting our things together, getting Addison settled with her breakfast, etc, and got in the van to head to the hospital around 8:30 a.m. I knew there was no possible way I could sit down for the 30 minute drive so Jason put the back seat down so I could get on my knees and lean forward on it. I called my mom to let her know we were leaving and did my best to stay relaxed.

We arrived at the hospital around 9, signed whatever papers we needed to, and I was escorted to triage while Jason parked the van. After the required 20 minutes of monitoring (which ended up taking about twice as long because the baby wouldn’t cooperate) I was checked and found to be almost 6 cm dilated. I was thrilled to have that much laboring behind me! We were escorted to our room where they did a saline lock IV and hooked me to the telemetry monitor so I could get in the tub. I’m not sure how long I stayed in there but the warm water felt good on my back. I chose to sit on the birth ball next which allowed Jason to push on my back during contractions. At some point during this time simply breathing through contractions wasn’t cutting it any more and I found myself naturally vocalizing which helped so much. Jason was amazing with the words that he chose to coach me with, reminding me to relax and open. I made my way up onto the bed in a side-lying position and it took everything in me to focus and work through each contraction. I could hear Jason and the nurse talking every once in a while and the sound of the Brown’s football game on the tv in the background. A few different times the nurse commented on how well I was handling everything and Margie said I should teach the childbirth classes I was so relaxed! The pressure Jason was putting on my lower back was what was getting me through each contraction and I soon found myself involuntarily pushing. The nurse checked me to find I was only 7 cm, which was slightly devastating. I couldn’t imagine doing this for much longer since I already had the urge to push! I kept focusing on breathing and vocalizing through each contraction and soon the urge to push was overwhelming and I could feel the baby moving down the birth canal. The nurse recognized all of this and asked to check me again. “8 to 9 cm, but VERY stretchy” was her discovery, which frustrated me. How was I going to be able to ignore that urge to push for who knows how long until I was fully dilated? (I learned later from Jason that she actually said she could push the rest of the cervix over the baby’s head if I wanted to start pushing.) I did my best the next few contractions to breathe through them and not push but my body was taking over and I just couldn’t help it. I made a comment that I couldn’t help myself and she said, “Just do what your body is telling you to do.” Sweet relief! I could push!
I moved into a reclining squat position on the bed and started pushing, gently at first to try to get the hang of it. Pushing felt so much better than not pushing, but my pubic bone hurt really badly in between contractions from the pressure her head was putting on it. Because of this I starting pushing as much as I could and as hard as I could with each contraction to try to get it over quickly. After a few minutes of pushing while reclining I asked if it would be better to move into a different position. Margie told me to do whatever I wanted to do so I moved to my left side for a bit. This felt ok, but my hip started hurting from my leg being held up so I finally moved onto hands and knees which felt the best, by far. Pushing just felt so natural. I started getting worried that I wasn’t making good progress and that she wasn’t going to come out like she should so I repeatedly asked for “progress reports” on how much she was crowning and if I was doing ok. Jason and Margie, along with the two nurses, were amazing cheerleaders and kept telling me I was doing great and she was coming. After 30 minutes of pushing Hadley Reese made her entrance into the world! As soon as her head was out she started screaming, but I had to wait till the next contraction to push her shoulders out, and then her waist. The official time of birth was 2:24 p.m. on September 11, 2011. Margie slid her up between my legs where I picked her up and hugged her to my chest. I kept saying, “We did it!” Jason later said I was acting like a kid at Christmas, I was so giddy. The placenta came on its own just a couple minutes later and Hadley and I were able to bond while the doctor came in to assess my bleeding and stitch me up (I had a 2nd degree tear which I later found out tore through a vein, resulting in over a liter of blood lost). She wasn’t too interested in nursing right away so we just snuggled, getting to know each other in a brand new way.
This journey has taught me more than I could ever imagine about trusting my body and the power of love and trust in those around me. I could not have had this incredible experience without Jason’s loving support and our wonderful nurse Alice and midwife Margie. I know it has changed me and I thank God that He allowed me this experience.

lualtman said…
I had a very similar experience all the way around. What an awesome story, thanks for sharing!!
November 1, 2011 at 9:17 PM